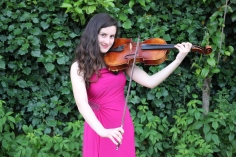 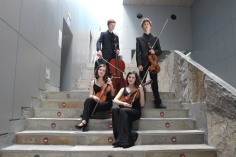 How music started in my life

Since I was a little kid, I have always felt attracted by music. I would sing all the songs I could come up with, and even make songs of my own, with a word or two, just to annoy my parents.

Apparently, my strategy worked, and they decided to take me and my twin sister (who is an incredible person and violist) to the Vila Real Regional Music Conservatory (maybe hoping I would start singing better).

It didn’t work out the way they expected, but soon, both me and my sister fell in love with the sweet viola sound (who doesn’t?).

Since that moment, it has been an unique journey with endless hours of study, but also many moments of happiness.

All the hard work paid off and made me realize the major role that music plays in my life. 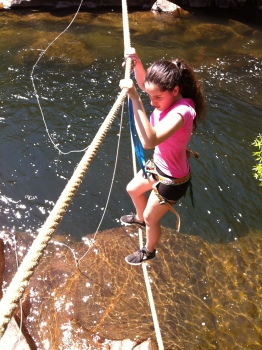 A little bit more about me

In my free time, I enjoy listening to music, especially while I am running.

Music and sports are two things that bring me joy and a sense of freedom.

I also like walking with my family and talking to them about everything. My family has been a major support to me during this amazing journey and I owe them the person they raised me to be.

Spending time with my friends is also something I really enjoy, although I don’t have much time to do it.

Festivals and orchestras also allowed me to know many interesting people from different places and to make friends that share my passion for music.

So far, music has only brought me unbelievably great experiences, and I feel grateful and delighted by all the amazing things that have been happening to me.

Overall, I am a regular teenager, with dreams, ambition, disappointments, pleasant surprises and a backpack full of books.

Goals for the Future

Beside my personal fulfillment, I’m committed to becoming a professional Viola Performer (musician). I study and work very hard in order to achieve this goal. I would love to be a soloist, an orchestra musician and a Viola teacher. Music has always been my passion and I believe that there are no boundaries when it comes to doing what you love. My dream is to keep on performing and touching people, and ultimately, making everyone understand the importance that music has in our lives and share the pleasure that comes within it.

HONORS, AWARDS, AND SCHOLARSHIPS (in the last three years)

2015:  Student of Excellence Board at Camilo Castelo Branco High School;

1st place in the regional championship of school cross-country

2016:  Award for Best Student of Strings at the Vila Real Regional Music Conservatory

Student of Excellence Board at Camilo Castelo Branco High School;

1st place in the regional championship of school cross-country;

Regional champion of the 1000 meters;

Participated (in representation of the city of Vila Real) in the 5th Musical Show of the Eixo Atlântico (Atlantic Axis) as a Soloist and in the category of small chamber groups (string quartet) and won the 3rd prize, Spain;

1st prize, category B of viola, in the “5th City of Vigo Violin, Viola and Cello Competition” in Vigo Superior Music Conservatory, Spain;

Received a commendation from the City Council of Vila Real;

2017:  Student of Excellence Board at Camilo Castelo Branco High School;

Received a second commendation from the City Council of Vila Real for her musical talent.

Additional Education and Training (in the last three years)

Selected to perform in festivals of national and international orchestras:

Philharmonic and String Orchestra concerts (in the last three years)

Invited to perform at:

🎹🎼 Kher Ching 🎼🎹
Agnieszka Michalik
Albina has performed on stage since the age of 3 and really enjoys singing all genres of music and has represented Australia in many music competitions and recitals throughout the world.
Teruyoshi Sato 2018 Participated in the 5th Komagane Highland Music Festival, sang 2 arias as Alfredo from La Traviata.