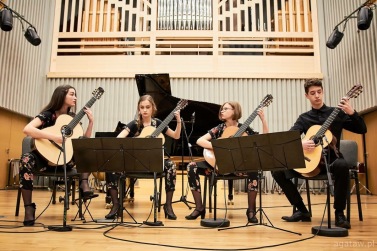 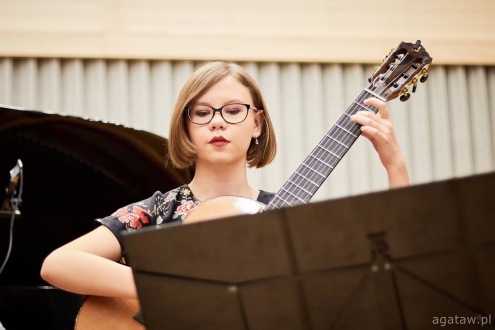 – Amelia Duchnowska, Hanna Zielińska, Jagoda Opania and Michał Mastalarz.
Quartet’s members are fifteen years old guitarists from Ogólnokształcąca Szkoła Muzyczna I i II st im. K. Szymanowskiego in Wrocław. Each of them are studying at professor Marek Zieliński guitar class. They have started playing together a few months ago, in 2017. During this short period they won a Second Prize at Jawor Chamber Ensembles Competition 2017 and they gave the world premiere of Toccata by Maciej Staszewski.

Amelia Duchnowska (2002) studying in Wroclaw (Poland) in guitar class of Marek Zielinski at Ogólnokształcąca Szkoła Muzyczna I i II st im. K. Szymanowskiego. She began learning the guitar at the age of seven. Amelia has won main prizes in several polish and international guitar competitions, lately Premio Assoluto during Alirio Diaz International Guitar Competition Young Guitarist 2017 in Roma (Italy) or Grand Prix in Dolny Kubin  2017 (Slovakia) and many others. She has been taken master classes with Aniello Desiderio, Marek Pasieczny, Andrea de Vitis, Petrit Ceku and others.  The young guitarist was awarded by the National Fund for Children and  Mayor of Wrocław scholarship in 2011-2018.

Hanna Zielińska (2002) is studying in Wrocław in guitar class of Marek Zieliński. She has got achievements in many guitar competitions, for example third prize in Dąbrowa Górnicza and second prize in Zielona Góra and Jawor. She also won first prize in Oleśnica and Witowice. Last year she was awarded first prize in Roma during Alirio Diaz International Guitar Competition Young Guitarist.

Jagoda Opania (2002) She has been playing guitar since 2009. She is studying in Ogólnokształcąca Szkoła Muzyczna I i II st. im. Karola Szymanowskiego in Wroclaw. She is in prof. Marek Zieliński’s class. She is a laureate of many competitions for example in Dolny Kubin and Trzęsacz.

Michał Mastalarz (2002)  He is in prof. Marek Zieliński’s class. He is a laureate of many competitions for example first prize in XII Ogólnopolski Konkurs Gitary Klasycznej im. A. Tansmana w Kępnie and second prize in XIV Polish Guitar Competition Gitarowym in Strzelce Krajeńskie and many other.

🎹🎼 Kher Ching 🎼🎹
Agnieszka Michalik
Albina has performed on stage since the age of 3 and really enjoys singing all genres of music and has represented Australia in many music competitions and recitals throughout the world.
Teruyoshi Sato 2018 Participated in the 5th Komagane Highland Music Festival, sang 2 arias as Alfredo from La Traviata.