Mateusz Kępka
This talented, 12 years old violinist is on his 6th year at the Paderewski Music School in Cracow,
Poland. He started to play the violin at the age of 7 but from his youngest preschool years he has
been fallen in love with music. He has been expressing it through singing, various dance and vocal
performances. He has taken part in lots of song competitions, achieving many success. Once he saw
the kindergarten violinist band and since then the violin has become his favourite instrument. He
enjoys playing the violin very much and tries to play many songs only from hearing in his own
interpretation. During his primary education he has been succeeded in many Polish and international
violin competitions.
Mateusz’s great passion is also singing. Before his mutation he attended the children choir and
created the solo roles in various performances, including the main character in the musical “Little
Lord Fauntleroy” on the stage of the Krakow Opera.
In the future Mateusz would like to be a famous violinist (he admires David Garrett) or a conductor.
In his spare time he trains badminton and volleyball, likes playing the piano, board games and riding
a bike. 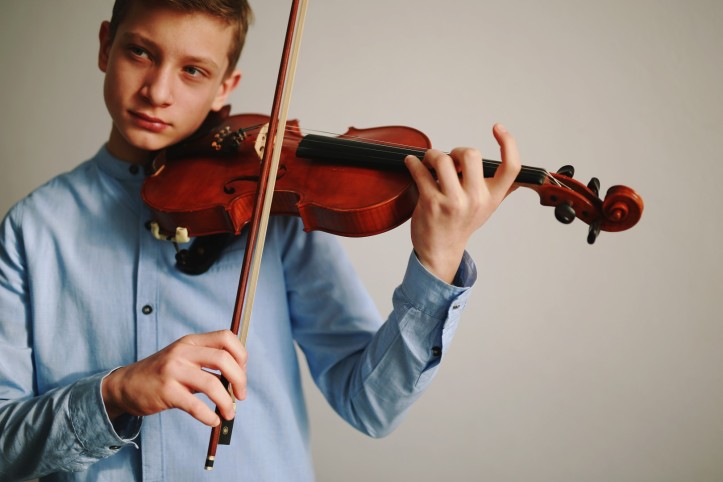 Born in Kiev, Ukraine, Margarita Pinkosz is an established classical pianist, harpsichordist and chamber musician. Pinkosz’s music journey began at the tender age of 4 in the N.Lysenko National Music school in Kiev, Ukraine and then continued to pursue music at the K.Szymanowski School of Music in Warsaw, Poland till her graduation in 2004. At just age 6, Pinkosz had her debut performance in National Filharmonia in Warsaw sharing the stage on multiple occasions with internationally renowned musicians. Even as a young performer, Pinkosz showed great potential obtaining countless of awards including winning 1st prize in two categories in the Int’l Piano Competition in Brest, France. Artist performed regularly in Poland and was invited to national and int’l masterclasses and festivals such as Fermata, Duszniki Zdrój,Łańcut, Krynica Zdrój, Castelnuovo di Garfagnana. She also worked closely with other critically acclaimed musicians including Andrzej Jasinski, Elisso Virsaladze, Ewa Poblocka, Jerome Rose, Oxana Yablonskaya, Vera Nossina, Wiktor Mierzhanov and was eventually invited to Fundusz na Rzecz Dzieci due to her achievements and accreditations. Even as Pinkosz move on to high school, her passion of the craft never wavered as she continued to perform for festivals on multiple occasions in Europe. The musician eventually got accepted into the Royal Conservatory of Brussels, Belgium under guidance of Evgeni Moguilevsky, and later Daniel Blumenthal. Continually gaining even more awards like winning 2nd Prize in the Int’l Piano Competition in Paris, France “Madeleine de Valmalete”, Pinkosz started to gain interest in contemporary music in a turn of events.
Karolina Laskowska
WICHAPOL PATTARASATHORN
Chompoonuch Wongsaroj , is 13 years old singer from